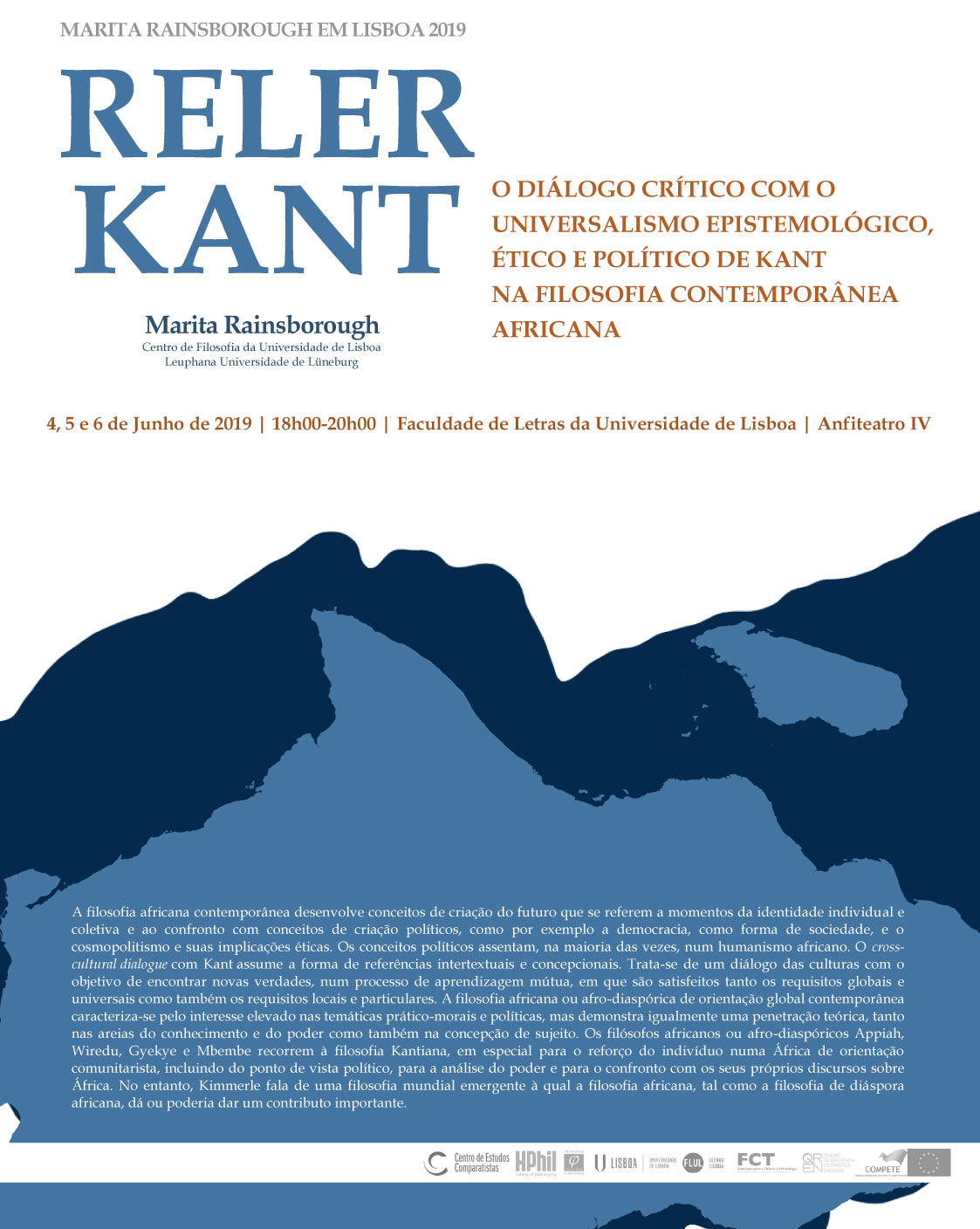 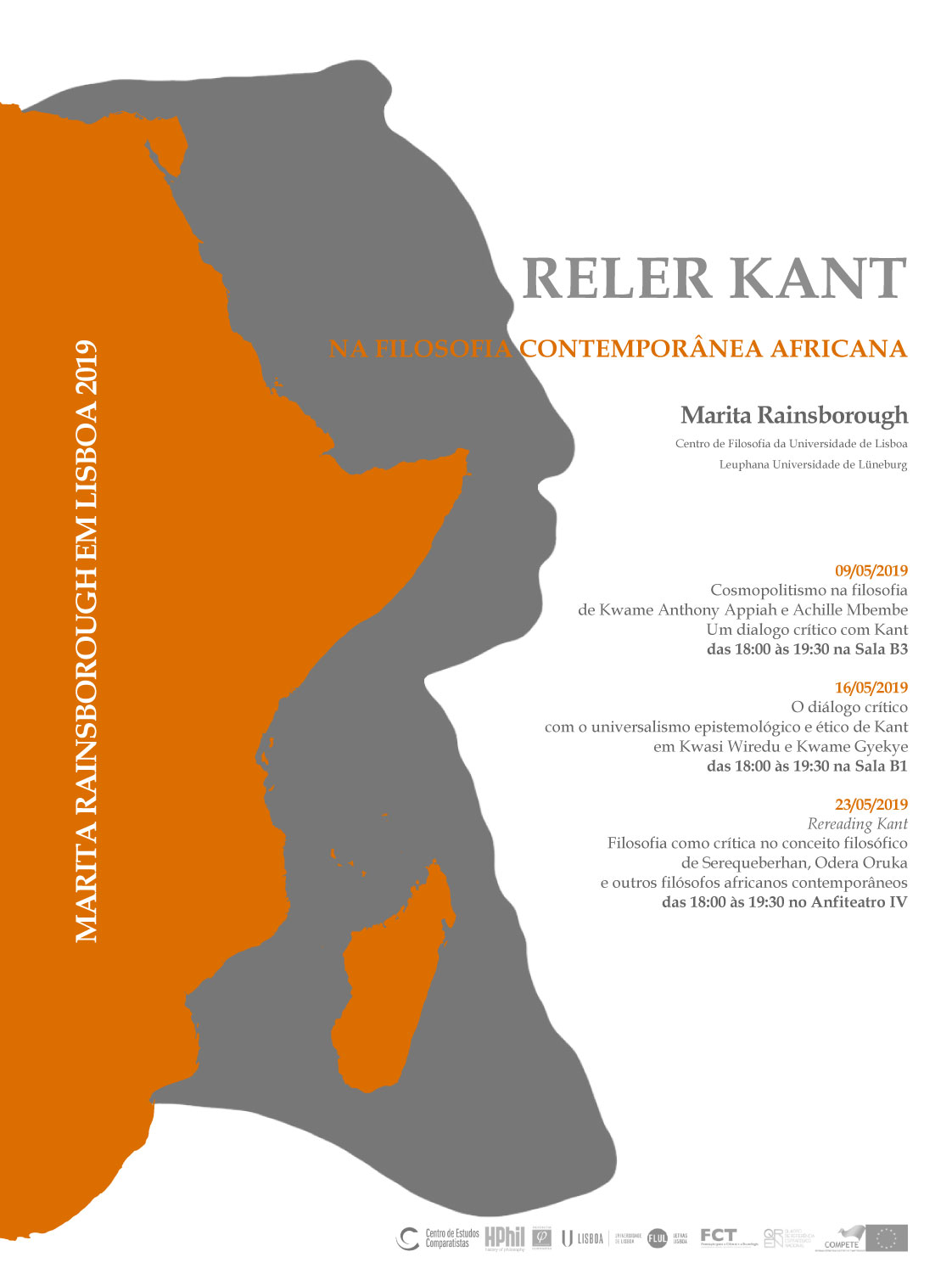 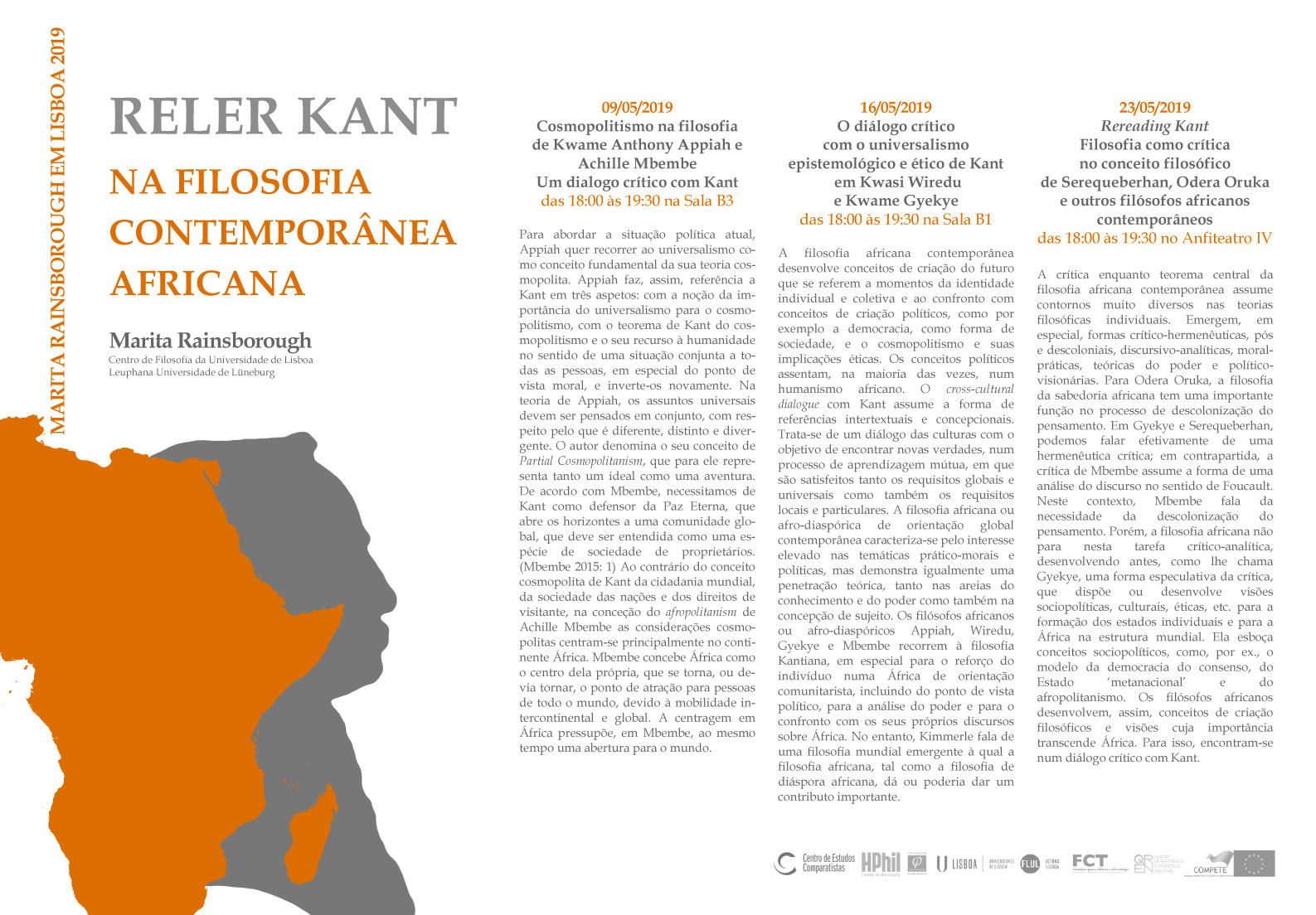 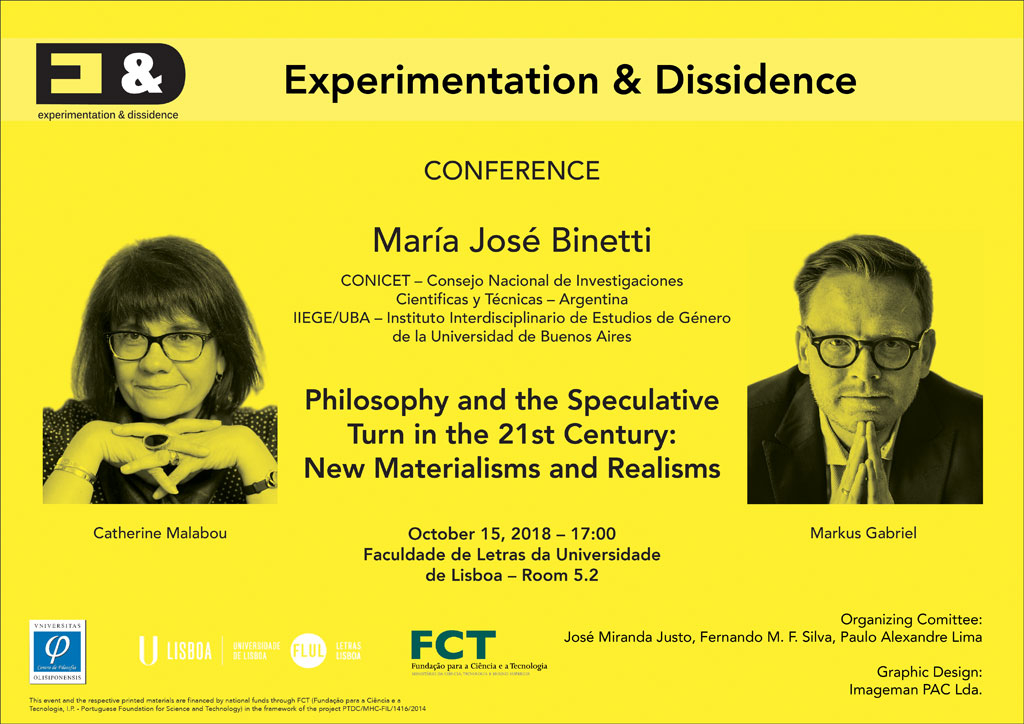 Philosophy and the Speculative Turn in the 21st century:
New Materialisms and Realisms

The second part of the 20th century has been dominated by a nominalist, anti-realistic and post-metaphysical trend, focused on the performativity of languages, texts, discourses, power structures, economic relationships, etc., and involved in some kind of sociolinguistic, hermeneutical, structural and deconstructive analysis. By contrast, the first part of the 21st century seems to emerge from the exhaustion of that nominalist paradigm, and the drive of a new realistic impulse defined by the irreducibility of the real to mere cultural discourses or power’s relationships. In this new speculative context, several materialisms and realisms spread out their strands, with the certainty of grasping the real in and by the real itself. The following lines aim at looking over the main authors and ideas of the newest philosophical stream.

1) Introduction: the last Nominalism of 20th vs. the new Realism in the 21th Century

I would like to address here a sort of general introduction to the so-called Speculative Turn in continental philosophy: a new material and realistic trend which is outlining the contemporary thinking. At first glance, the speculative realism confronts with the linguistic turn as main paradigm of the second part of twentieth century, focused on the performativity of languages, texts, discourses, power structures, economic relationships, etc., and involved in some kind of sociolinguistic, hermeneutical, structural and deconstructive analysis. The last decades of the last century have attended the post-modern implosion of the real into discourses, interpretations and performances of any kind.

Under the wing of “linguisticism”[1], the real became either the result of any sort of cultural constructivism, or the inaccessible transcendence beyond all experience and knowledge. In the first case, reality depends on power relationships, social praxis or singular decisions, without other measure or criteria than its own contingency. Politically speaking, such a linguistic relativism leads –according to Maurizio Ferraris[2]–to a populism in which every discourse is possible, or –according to Peter Gratton[3]– to the more conservative and reactionary position, so that “relativism and faith, supposedly opposed when the evangelical rightwing attacks liberal relativism, are bitter twins born of the failures of philosophy to claim the real”[4]. In a word, the oblivion of the real ends up reifying anything.

In such a context, the speculative realism emerges as spirit of the new century, a new state of thing which dyes all. Strictly speaking, this novelty recovers the old assessment of reality as subject matter of philosophy, irreducible to mere social discourses or language analysis. New realism recognizes to reality an autonomous status independent of human performativity, individual or social, and that is what Ferraris called the unamendability[5] of the real.

In a nutshell, after the last nominalism of the twentieth century, the new century attends the renaissance of the real grasped in its irreducible, immediate and irrevocable presence. Even though there is nothing new under the sun, and the history eternally repeats itself, the new realism claims for its right of originality and take distance from the old forms of reality, pre-idealist and substantialist.

The following pages aim at introducing the meanings in which reality says to itself for newest material and realistic trend. 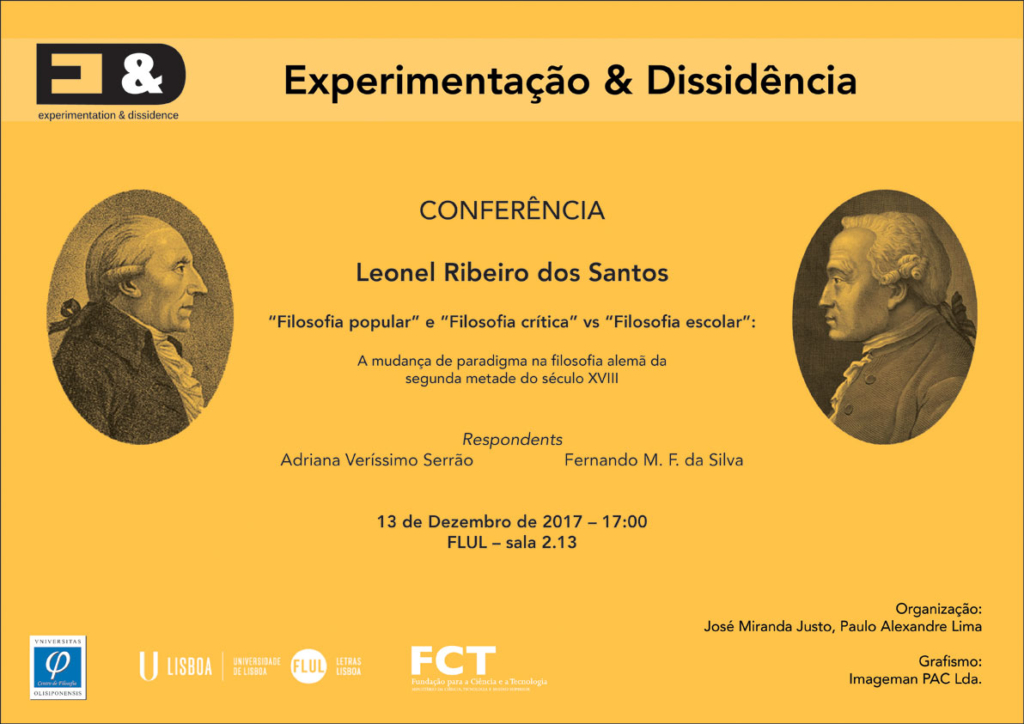 “Popularphilosophie, Kritische Philosophie vs. Schulphilosophie.”
The shift of paradigm in German philosophy in the second half of the 18th century.

This paper aims at analyzing some aspects regarding the transformation of German philosophy in the second half of the 18th century, bearing in mind the debate around the “popularity” or “true popularity” of philosophy held by Christian Garve and Immanuel Kant. Despite the skirmishes which seem to part the main representative of “popular philosophy” and the proponent of “critical philosophy” on the topic of the language of philosophy, there is in their respective strategies against “scholar philosophy” much more in common than appears at first sight. But that debate involves more than the mere question of language, or the form of presentation of philosophy: it is directed at new publics, it is ascribed new functions, it claims to bear the competence to enlighten new domains: sensibility and feeling (as Aesthetics, Philosophy of Taste or Philosophy of Art), History as a process of realizing the destination of humanity, Religion, Language, in short, all the wide field of Anthropology. 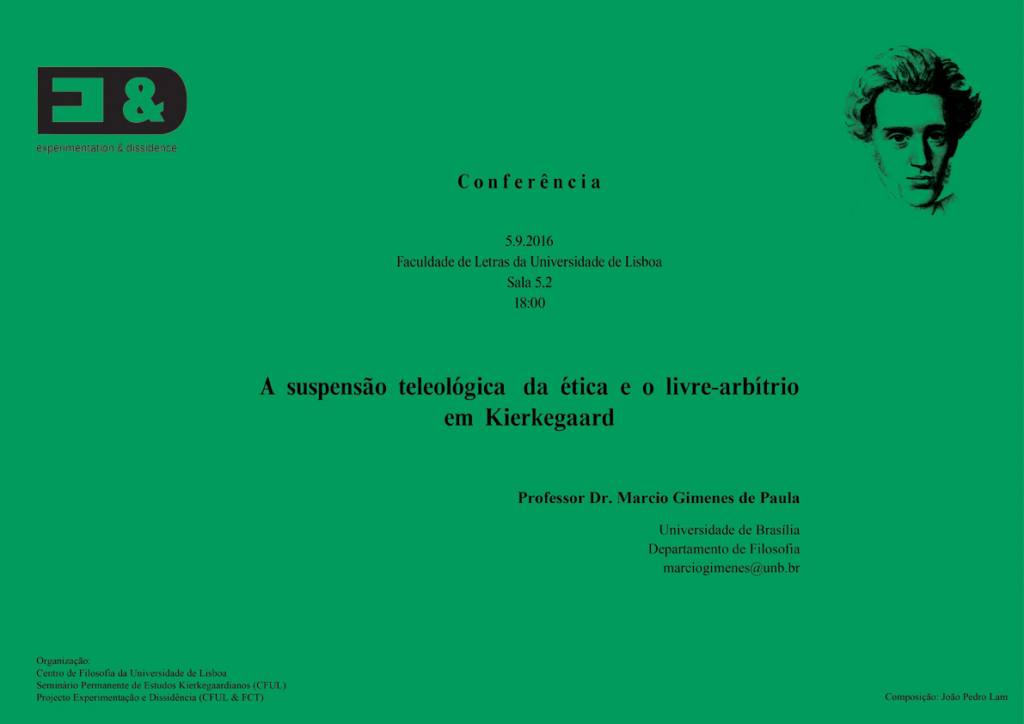 Faculty of Humanities of the University of Lisbon

The teleological suspension of ethics and the topic of free will in Kierkegaard: or how the ethical themes of Fear and Trembling and The Concept of Anxiety may be read from the Postscriptum

Abstract: Three of Kierkegaard’s works are extremely important towards analyzing ethical themes: the Postscriptum, Fear and Trembling and The Concept of Anxiety. The first one, though it is an immense and extremely rich work, will interest us only in comparison with the theses presented in Fear and Trembling, so as to elucidate them. In the second one, the story of Abraham – and God’s command to sacrifice his son Isaac – is, as is well-known, the source of inspiration for some of Kierkegaard’s reflections in Fear and Trembling. From such an episode, Johannes de silentio, the pseudonym author of the work, not only composes an ode to faith as the greatest of passions, but he enquires into a problem which, in his interpretation, seems to be central, i.e., the teleological suspension of ethics. In the third work, through the pseudonym Vigilius Haufniensis’ reflections, the Danish thinker deals with the themes of sin, free will and ethics, all fundamental in Christian tradition.

Hence, the aim of the present conference is to investigate, bearing in mind Kierkegaard’s reflections, a possible interpretation for the teleological suspension of moral in Fear and Trembling, in which circumstances this occurs and how we may inscribe it in the ethical debates of 19th century philosophy. Such a reflection will be considered in line with the investigation on The Concept of Anxiety, where this theme, especially on account of the discussion on free will, also has considerable weight.

One hypothesis towards investigating this question is an analysis not only of Fear and Trembling, but also of an important later work by the Danish author. I refer to the Postscriptum to Philosophical Fragments, particularly Section 2, entitled The subjective problem, or how subjectivity must be for the problem to appear to it. Here resides, in my opinion, an important key towards understanding Kierkegaard’s ethics as it is presented in Fear and Trembling, even if that work dates from 1843 and the Postscriptum from 1846, even if each of these works was written by a different pseudonym and even if the authorship of the Postscriptum is shared by a pseudonym and the author.

The ethical discussion is resumed in the analysis to The Concept of Anxiety. Here my interest is to investigate the context around the production of the work, particularly Kierkegaard’s interpretation of Adam and the theme of free will. To do so, we shall circumscribe our session to an investigation on the first chapter of the aforementioned work. Finally, posterior to an investigation limited to these three works, I shall produce my final conclusions.

Centre of Philosophy of the University of Lisbon